Based on the registry generated by the ICC’s Weather Station Network, the accumulated rainfall in 2016 was below the accumulated average of 2007-2014. Likewise, 2015 rainfall was also below average.

In 2015, rainfall was below average. May and June were months with few rains. September and October had substantially more rain, since precipitations were above the average, mainly because of the influence of the 20-E tropical depression.

Between May and June 2016, rains were above the average, but rainfall decreased in July and even though precipitation increased in August, rains decreased again in September and continued to decrease till the end of the year.

As a result, the precipitation for both years was around 200 mm below the average that was established between 2007 and 2014. 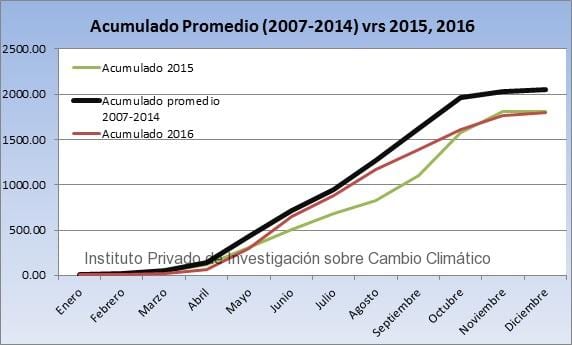 At the beginning of this year, the conditions of the El Nino Southern Oscillation were neutral. However, the first indexes of an El Nino appeared by March, indicating that this phenomenon will influence Guatemala (and Central America) this year, thus scarce rains are in the forecast for the second part of the Guatemalan rainy season.

It is important to mention that these data does not represent climatology, since the period evaluated does not reach 30 years.