Last November 17th, a drill to prepare against the emergency of a tsunami was held in Sipacate, Escuintla, which included the participation of different institutions and local people. This activity is part of the project “Building resilient communities and Integrated Tsunami Alert Systems in Central America”, which is led by UNESCO and funded by the European Union.

The preparations for this drill started on November 15th, with a workshop for COMRED, representatives of institutions that work in the area and presidents of COCODE’S. Later on, on November 16th, special work before the drill was performed, by creating a decision-making group that was in charge of planning this event, and validating the models of the possible tsunami’s impact scenarios. The institutions that participated are: SE-CONRED, INSIVUMEH, UNESCO, COPECO and the Private Institute for Climate Change Research ICC.

All these activities contributed to have a successful drill on November 17th, in which 300 people participated.

Among the activities performed by the ICC in this drill we can mention: coordinating the team of local and institutional observer that participated in this exercise, the general evaluation of the drill along with SE-CONRED representatives, and in the last session, to provide reporting and recommendations related to disaster management to municipal authorities.

Due to the seismic activity in the national territory, mainly due to the activity generated in the subduction zone in the Pacific coast, it is necessary to strengthen the capacities to respond at the local level. This is done through training sessions and people’s sensitization, as well as proper management and handling of the information issued by INSIVUMEH and CONRED, and foremost, to act under standard coordinating procedures at the municipal level and with operational protocols to respond at the community level. 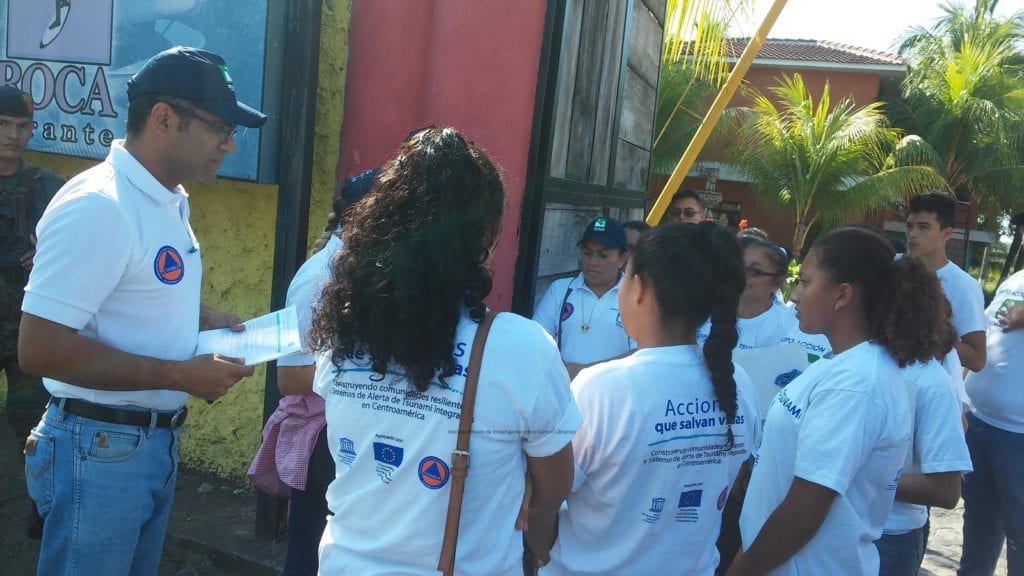 The Tsunami simulacrum was performed in Sipacate, Escuintla.