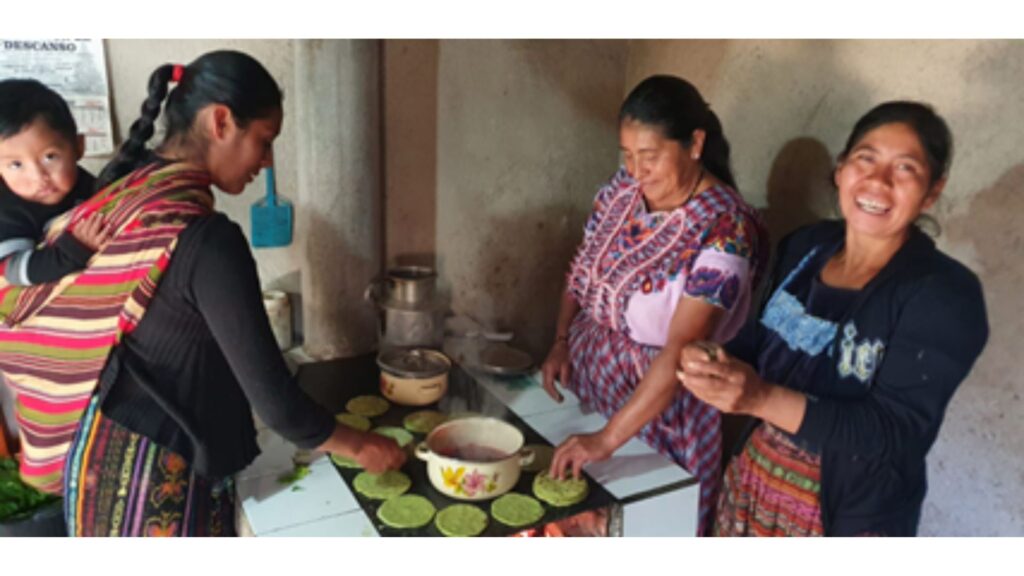 The ICC joins efforts to strengthen Food and Nutritional Security -SAN- (for its acronym in Spanish) of five municipalities of the department of Sololá: Sololá, San José Chacayá, Santa Lucía Utatlán, Santa María Visitación and Nahualá.

On June 28 and July 08, 15, 18, 20 and 22, actions were carried out to strengthen the “consumption” pillar within the framework of the -SAN- as part of the development of actions within the project “Implementation of adaptation measures to climate change and variability to contribute to food and nutritional security and the reduction of child malnutrition in communities and municipalities of the department of Sololá, Guatemala. -MACC SAN”, which is financed by the Spanish Agency for International Development Cooperation -AECID-.

Photo caption: From left to right: Preparation of recipes with local ingredients, tasting and presentation of the eleven dishes prepared together.

To strengthen the food security of families, workshops are held on “Feeding families healthily”, which aim to provide knowledge to mothers of families on the proper use and diversification of healthy food recipes. The workshop promotes the use of beta chard (vulgaris variety), cicla, spinach (Espinacia oleraceae), and white grass (Brassica sp.), which have a high content of nutrients such as folic acid, iron, calcium, potassium, riboflavin, niacin, vitamin C, among others.

Photo caption: From left to right: Food preparation with beneficiaries of Las Minas, San José Chacayá. Demonstration of healthy dishes that were prepared.

Through the workshops, knowledge has been gained about the diversity of dishes that can be prepared using locally available and nutritious plants. This is integrated with the food production actions in non-conventional structures (vertical gardens) that ICC implements in homes. This is expected to lead to the adoption of these dishes in the food culture and provide a longer temporal sustainability.

Photo caption: From left to right: Preparation of plant materials used in the activity with the group of beneficiaries of Yaxón Neboyá and Chuarixché of the municipality of Sololá. Presentation of prepared dishes.