Private Institute for Climate Change Research, Guatemala. We are currently monitoring a frontal system that interacts with the humidity that enters from the Atlantic and Pacific Oceans, allowing rains to happen in the midlands, as well as in the North Transversal Belt.

For this week, the following conditions are forecasted: 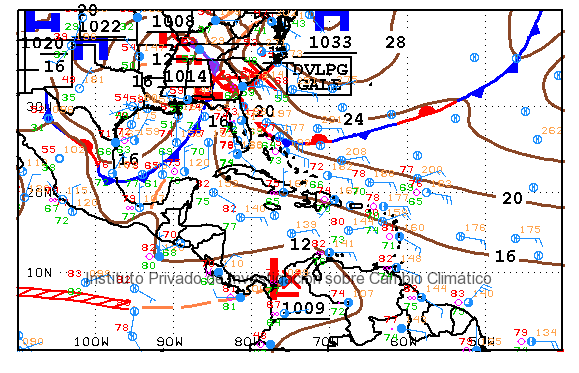 NOAA’s GSF model shows the frontal system in the Gulf of Mexico, which interacts with the humidity that enters the country from the Atlantic and Pacific Oceans. Source: NOAA, 2018.

Climate perspective for May, June, and July. First half of the rainy season, Guatemala 2018

INSIVUMEH participated in the LV Climate Forum of Central America, from April 17 to 18, in El Salvador, where experts of meteorology and climate analyzed the atmospheric and oceanic conditions, as well as the historic rain data for each Central American Country, and thus to have a rain perspective for the May-July period.

This forum is organized by the Regional Committee of Hydraulic Resources (CRRH) of the Technical Secretariat of the Central American Integration System (SICA) and with the support of the Ministry of Environment and Natural Resources (MARN) of El Salvador.

National perspective for May, June, and July

The colors show the rain forecasts for Guatemala: green indicates that for May, June, and July there will be more rain, yellow shows that rain will average the normal values.