Currently, the temperatures of the zones of temperatures (SST) are below the average in the central area of the Pacific Ocean.

As the models have reflected, there is a high possibility that there will be a transition from La Nina to ENSO-Neutral, with a 55% chances of probabilities to occur in May, and could continue in this neutral phase throughout the middle of the second half of the year.

As the International Research Institute for Climate and Society IRI reports, most of the dynamic and statistical models forecast from 50% to 75% chances that the Nina conditions will change to Neutral in May, and they will continue through September. See Picture 2. 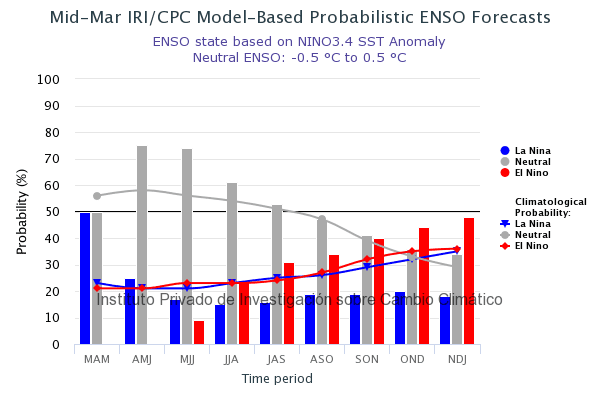 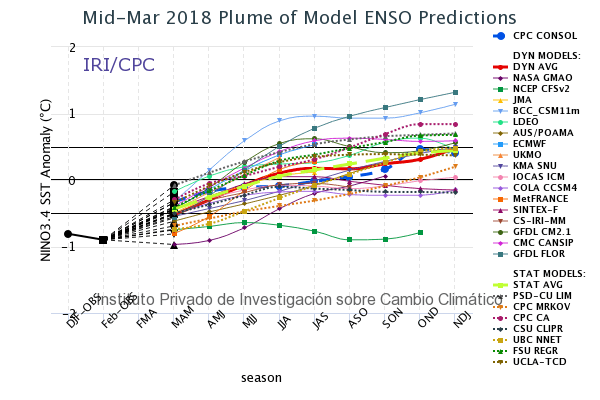 This is a month for transition from dry to rainy season and reflects a warm season with heat waves, where 2 to 3 heat waves could normally occur, lasting from 3 to 4 days. Regular rains in the midlands region normally begins in the middle of the month, when the Niña conditions prevail. Some isolated hail events could also occur.

The information base to elaborate this report is issued by the International Research Institute for Climate and Society IRI, and it is based in dynamic and statistical models that estimate the behabior of the ENOS for the values of the anomaly of the temperature of the surface of the sea of the El Niño 3.4 Index. The information of the National Oceanic and Atmospheric Administration NOAA is also taken into account, which is also based on climate analysis.

The information given in this bulletin is updated monthly with information that forecast several months in advance, therefore, the values of estimation could change due to the uncertainty of the forecasting models. It is important to mention that Guatemala could show drought conditions under El Niño conditions, counterwise to La Niña, where a surplus of rains could occur.